The Right Products With the Right Installation Designs And Methods Make Protection Of Combustible Penetrants Safe And Easy! The use of plastic pipes in construction is increasing with each passing year. Most people are aware of the economies of using plastic pipes as well as some of the benefits… Plastic pipes are easier to install. They are significantly lighter in weight and they are durable in that they won’t rust or corrode. The down side is that these pipes are combustible and can pose a fire hazard if not properly firestopped! 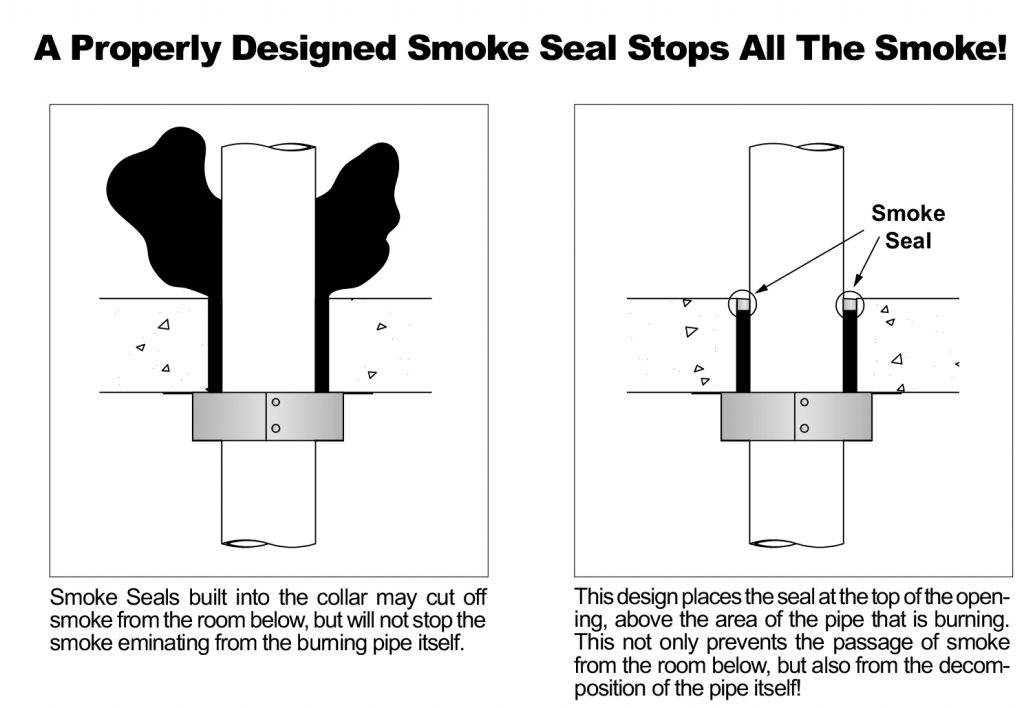 Understanding The Hazards: Plastic pipes when exposed to fire will react differently according to the type of material they are made from. Some will soften and then char as the fire progresses. Others will soften and melt. If not properly firestopped, these pipes may burn out and leave a passage for fire into adjoining rooms and cause a fire to quickly propagate.

The Special Hazards of DWV: Vented pipes are more of a hazard then supply piping or electrical conduits. With vented pipes, the fire is drawn into the pipes and then blown through them by what is called the chimney effect. The larger the pipe, the greater the airflow. Fire may spread quickly if the pipe is not quickly constricted by an appropriate firestopping device or system.

Squeezing Off the Path for Fire: As we mentioned earlier, constriction is the key to protecting plastic pipes. Many products utilize intumescent materials to accomplish this task. Intumescent materials expand when heated or burned to many times their original volume. Some intumescent materials claim to replace burning materials and fill the void created by them. There simply isn’t enough time to replace burning materials. The key is to squeeze the pipe shut before the fire can burn up the pipe. With the right products and the right installation designs and methods, the protection of combustible penetrants can be made safe and easy.

Designing Firestops for Plastic Pipes: Since intumescent materials expand when exposed to heat. It is important to utilize a design that quickly introduces heat into the system as well as an intumescent material capable of expanding in sufficient volume under the conditions present in the installation. Since heat is the key factor, it’s important to understand that the construction that surrounds the pipe is a vital consideration. Intumescent materials embedded in thick concrete may not heat up quickly enough to close off burning pipes due to the heat sinking effect of the concrete. Some test labs use a principle developed in the days of testing foam firestop products for nuclear plants. These materials functioned by attrition during a fire and seals in thicker walls and floors tended to perform better than the same thickness seal in thinner walls or floors. Thus it was assumed that firestops tested in thinner assemblies could be used in thicker assemblies. Since intumescent materials require heat to work, systems that are tested for thinner barriers may not be suitable for thicker ones!

Selecting the Appropriate System: Now that we have acquainted you with some of the critical factors affecting these installations, we’ll provide some help in selecting an appropriate system.

Choose the Fastest System: Where possible always choose the fastest system that is appropriate for a given application. For example, testing has shown that externally mounted devices or collars react faster than systems that mount internally. This is logical since heat can get to them more quickly. Our experience shows that T Ratings are a pretty good indicator of speed in a given application. Usually faster reacting systems will produce higher T Ratings.

Use the Right Amount of Intumescent Material: Always use the amount of intumescent material shown in the system that you have selected. Too little may mean a pipe that can’t be completely closed. Too much may cause a similar problem. Remember… speed is critical! Using more wraps may sound like a good idea, but in reality it may mean more intumescent material to heat up and this may slow the reaction down too much. An indication of this reaction may be found in some published systems. Some systems for 4” PVC pipe have a 2 hour F and T Rating using 3 wraps. These same systems have a 3 hour F Rating and a 0 T Rating when using 4 wraps. This is clear evidence that increasing the mass for this type of material slows its performance.

Appropriate Fasteners… Keeping it All Together! The right materials and the right design may all be for naught if everything doesn’t stay where it belongs. This means using the right fastening methods. Surface mounted collars should be secured to the wall or floor using a non-melting, non-burning fastener that is suited to the construction of the wall or floor. Since burning or melting pipe may sag, some stress may be applied to the fastener. Also aggressive expansion of the intumescent material will apply some stress as well. Thus, we do not favor the use of screws in gypsum board. We recommend toggle bolts or mushrooming steel anchors. In concrete, we recommend wedge type anchors over pin and shot.Remember… all fasteners must hold in order to do the job. When in doubt, put additional fasteners in. We are often asked if a particular fastener may be used. We’re not the fastener experts. That question
rightfully should be directed to the manufacturer of the fastener. The questions to ask: Will every fastener hold every time? Will the fastener induce stresses that might crack the concrete? Will the fasteners, continue to hold during a fire?

Collar Mounting Tabs: Did you ever see a stool with two legs? It’s easy to see that two legs aren’t enough. The same is true with collars. We mentioned the stresses applied to the assembly. Good sense tells us that even on the smallest collars, 3 mounting tabs are the minimum required to be sure the device will not rock, or be pushed ajar by the forces that are being exerted on it.

Smoke Sealing: A few collars have appeared on the market that claim to incorporate a smoke seal into the device itself. The smoke in a fire will come from two sources. Smoke will be produced in the room that is afire, so there is the need to block the passage of this smoke. Many mounting surfaces are not uniform enough to count on such built-in seals. An example of this is core drilled concrete. The second source of smoke will be the burning of the pipe itself. Built-in seals do not stop the passage of smoke from the decomposition of the pipe within the wall or floor cavity itself. For this reason, we always recommend a caulked seal. The seal should
be applied on both sides of walls and floors. Minimally, we recommend the top surface of floors, if both surfaces cannot be reached.

STI SpecSeal® Products & Systems…Safer, Easier, More Economical! The issues that we have raised here are complicated and difficult to understand. The important thing to remember is that we have considered these issues as we have designed these products and engineered our systems. Various combinations of SpecSeal® products have been tested and approved for PVC, CPVC, ABS, ABS Foam Core, and FR Polypropylene pipes. Systems have been designed and tested for vented (DWV) and unvented (supply) applications in most common forms of construction.