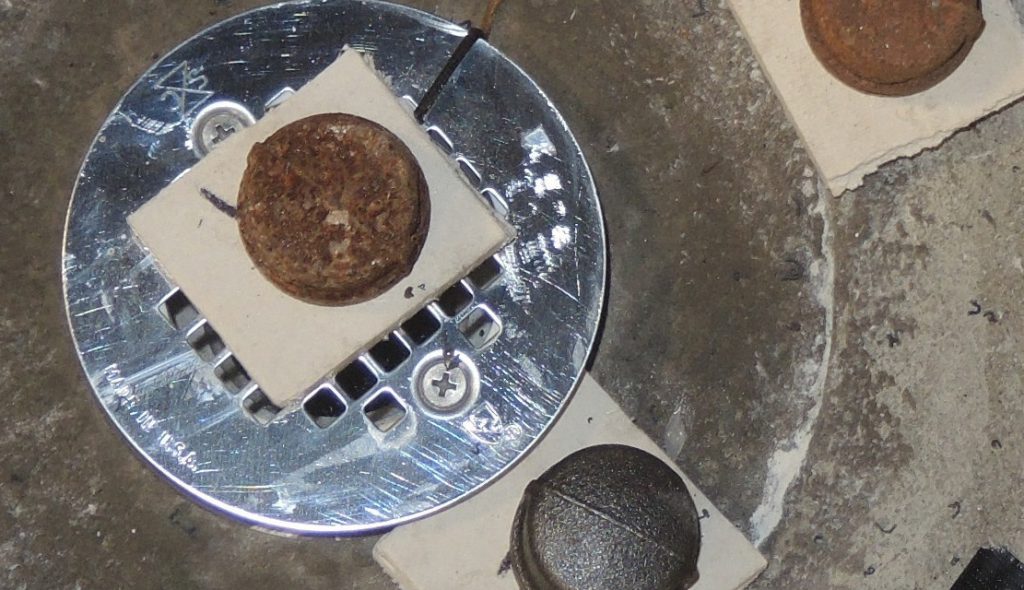 Floor, shower and tub drains seem like fairly straightforward building features that don’t warrant a great deal of attention. Unfortunately, these types of drains can result in firestopping headaches for both manufacturers and installers. The test procedures can often be more rigorous relative to a regular through-penetration and the International Building Code (IBC) requires equal F and T Ratings since the drains are penetrants in a floor assembly.

Both test standards for penetration firestop investigations, which are UL 1479 and ASTM E814, require some sort of cap or other blocking method to seal the end of the pipe inserted into the furnace. Capping the pipe serves to limit the transfer of gases through the test sample and out of the furnace. Obviously for most metallic penetrants this cap will remain in place for the full duration of the fire test, but we all recognize the prevalence of plastic drain lines. How long will a plastic pipe and cap remain intact when exposed to temperatures in excess of 1,000 degrees Fahrenheit during the opening minutes of a fire test?

The exact amount of time a nonmetallic pipe remains closed within the furnace varies depending on pipe material and wall thickness, but the resounding answer is not long! A very rough average is probably between five and ten minutes. When testing is conducted on an open piping (drain, waste or vent) system for nonmetallic penetrants it becomes a race between the intumescent material working to collapse the pipe and the flames shooting through its inner diameter once the pipe opens within the furnace. The opening moments of some nonmetallic piping tests will bear witness to flames shooting from the unexposed end of the pipe like a blowtorch.

This flaming is not considered a failure since the pipe would be continuous in a real world application and the fire would be internally contained until it worked its way through the wall of the pipe, at which point failure has occurred. However, since floor, shower and tub drains are always open to the environment above the floor testing laboratories consider tests a failure as soon as flaming occurs through the drain itself. This makes these fire tests much more critical than other through-penetration tests with a pipe projecting above the floor. Firestop manufacturers must plan accordingly when testing new designs to be used as firestops for drain fixtures.

Firestop contractors can face challenges when trying to identify a floor drain system that has an equal F and T Rating. The IBC requires this sort of rating since the drains penetrate a horizontal assembly. The specific language for these requirements can be found within section 714.4.1.2 of the 2015 edition of the IBC. Thermocouples measuring temperature rise are placed directly on the drain grating during testing and temperatures here tend to rise very quickly due to their proximity to the furnace and hot gases escaping through the drain pipe. Not all firestop systems will have an equal F and T Rating since this is a code driven requirement and fire tests are not evaluated with a pass/fail criteria dependent on the T Rating. A potential solution is the exception language within the IBC that exempts floor drains located within the concealed space of a horizontal assembly from equal T Rating requirements. Please do not hesitate to contact STI Engineering Services for assistance with these types of applications.