UL 1479/ASTM E814 defines the test procedure used to measure the air-leakage of a fire-stopping device. The test is completed using a tightly sealed chamber and a flow measurement device capable of measuring ultra-low volumetric flows of air. UL 1479/ASTM E814 specifies the test to be completed at 75 Pa.

The purpose of this investigation was to measure the air leakage performance of the EZ-Path devices as applicable to the Clean Agent Enclosure Integrity test outlined in NFPA 2001, ISO14520, and EN15004. The same test procedure and test chamber as defined by UL 1479/ASTM E814 was used, however the test was conducted a multiple pressures ranging from 20 Pa up to 150 Pa. Recording air leakage data at multiple pressures enables a regression analysis to be performed on the data and a generalized performance equation to be generated.

The test chamber was prepared and the EZ-Path device was installed as per UL 1479/ASTM E814. The device was sealed with a non-permeable membrane and the background leakage of the test chamber (QL) was measured to be below the lowest measurement capability of the flow measurement device. For all test data, QL is assumed to be 0 cfm. This is also the most conservative interpretation of the data since all measured leakage is attributed to the EZ-Path device and none is attributed to the test chamber.

The air leakage of each device was measured at a number of pressure conditions varying from 20 Pa up to 150 Pa and each measurement series was repeated with the device completely empty and with the device fully loaded with cabling. The results of each test can be found below, in Table 1. This table also includes conversion of the airflow in an equivalent leakage area (EqLA, as used in NFPA 2001).

The data was plotted in log-log space and a regression analysis using a standard least squares fit was performed to determine the slope and the intercept of a straight line in log-log space that best represents the data. These two value are used to derive the coefficients k and n respectively in the equation  c f m = k ∗ Prn

In air-flow behaviour, the flow exponent n must be between a value of .5 (representing the ideal flow through a round hole in a flat plate) and 1 (representing completely laminar flow through a long, narrow passage). In the cases where the mathematical regression analysis resulted in an n-value of greater than 1, the n-value was adjusted to be a value of 1 and a visual line of best fit was determined.

When testing the Series 33 device, most of the unloaded test conditions resulted in flows below the lowest measurable air flow of the flow measurement device. These data conditions were ignored and a line of best fit (with a maximum n-value of 1) was visually determined. 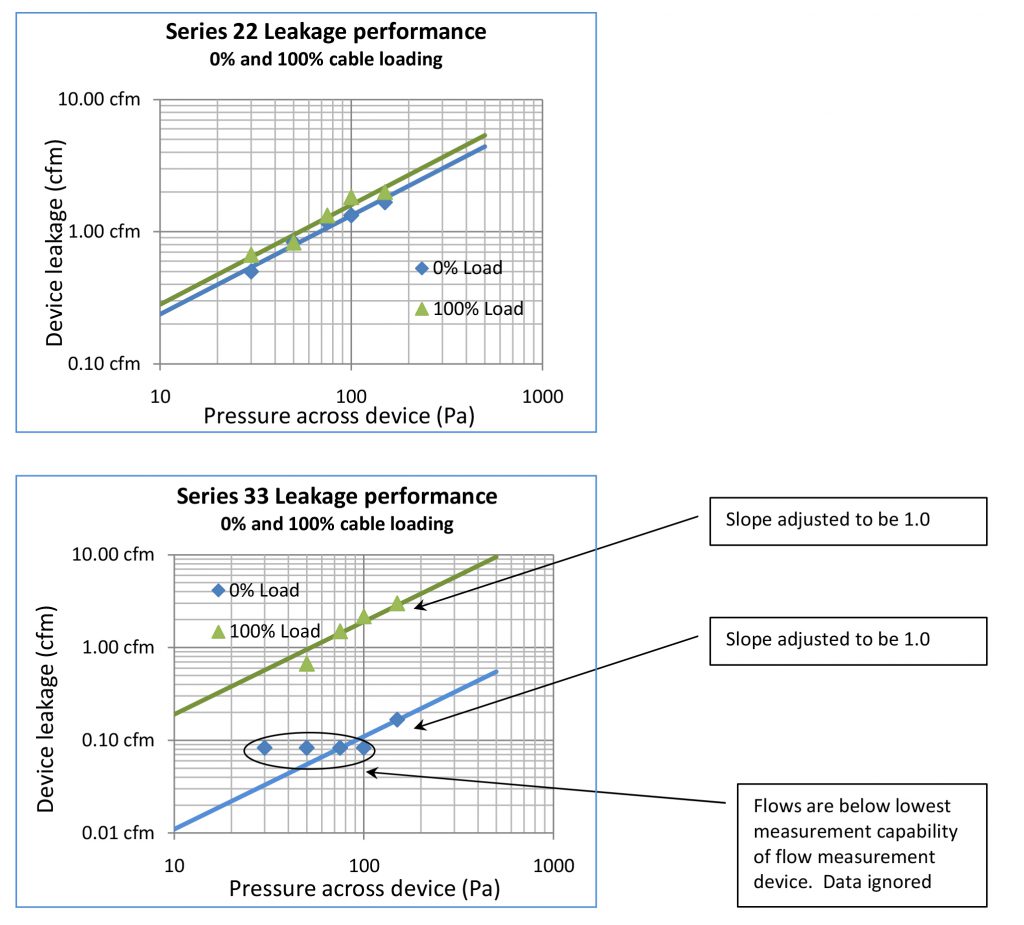 The line of best fit equation was then used to create a new prediction of flow performance at various pressure differentials across each device. This performance data can be used as supplementary input into modern Enclosure Integrity Testing applications and into the FSSA’s Pressure Relief Vent calculations.

SUMMARY OF RESULTS
A comprehensive summary of all of the results of the EZ-Path device testing can be found below. Leakage performance has been given at discrete test pressures as would be typically encountered in a clean agent installation and as required by the FSSA in their pressure relief guide. Leakage performance has been supplied in both metric and imperial volumetric flow units and in representative equivalent leakage areas (EqLA) in both metric and imperial units. 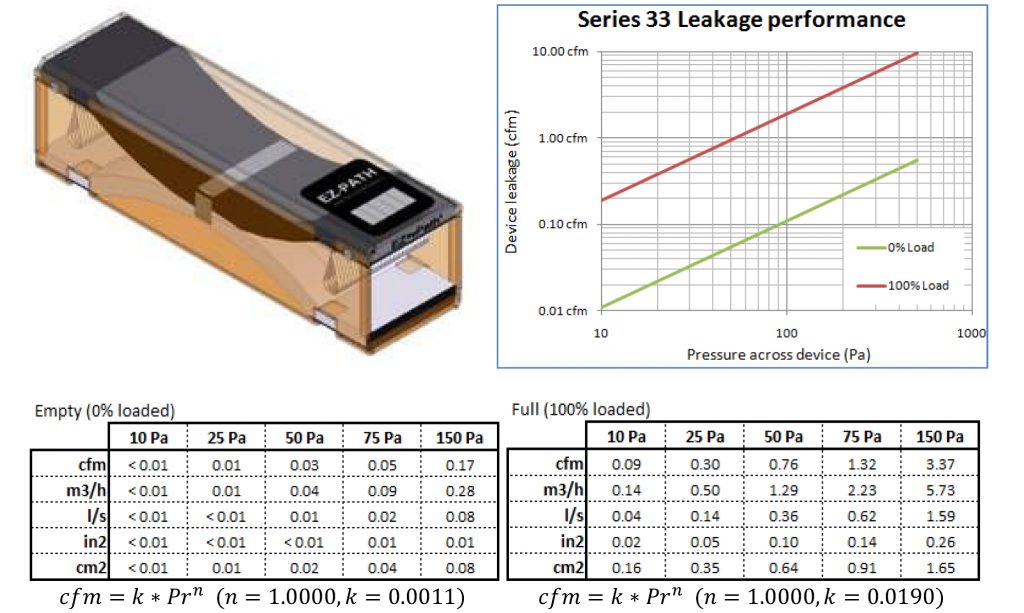 The above analysis is believed to be correct and the results should serve as a good approximation of what one would expect in
the field in an ideal installation and when these devices are installed according to STI recommendations. Any enclosure with a
gaseous suppression system should be tested in accordance with NFPA 2001, ISO 14520, EN15004 and/or other local
jurisdictional requirements.