Defining the Movement Capabilities of Firestops

Occasionally STI’s Engineering Services will be asked to comment on what degree of movement is acceptable for a through-penetration firestop. It is easy for contractors and architects to determine the allowable movement capabilities of a joint system since the test standards, which are either ASTM E1966 or UL 2079, used to investigate the performance of a joint include instructions for cycling dynamic joints prior to the fire test. These systems will report a nominal joint width and the movement capabilities as a percentage of compression or extension from this resting position. However, ASTM E814 and UL 1479, which are the standards used to test through-penetration firestops, do not include provisions for movement testing. How can we quantify movement for through penetrations if the relevant standards do not give any guidance?

Prior to late in 2016 we used our knowledge of the different characteristics of individual firestop products and known field performance to inform end users in regards to expected movement performance for through penetrations. A silicone material or firestop pillows would be typical suggestions for firestops expected to experience a relatively large degree of movement. This was and continues to be a reasonable approach, but in November of 2016 a new ASTM standard was published that can help quantify the movement allowances of throughpenetrations. This new standard is ASTM E3037, “Standard Test Method for Measuring Relative Movement Capabilities of Through-Penetration Firestop Systems.”

The standard establishes guidelines for firestop systems to be cycled through a range of displacements perpendicular to the assembly itself and a second set of displacements within the plane of the test specimen. The test sponsor selects maximum displacement values from tables within the standard and any damage to the firestop is recorded. Following the movement cycling the same test assembly is subjected to a fire resistance test to ensure the firestop system is still able to perform its primary function.

It has been several years since this standard was initially published, but presently testing laboratories are still in the process of deciding how they will report the data collected during these tests. Therefore, any results to date are strictly generated internally by firestop manufacturers. STI has built a specialized testing assembly that holds the test specimens and is programmed to cycle through the required displacements with the appropriate number of repetitions as established within ASTM E3037. Once the testing laboratories have finalized presentation of movement data for through-penetrations within their respective directories STI will be able to update our relevant systems to show movement capabilities.

Initial testing has shown that firestop devices such as cable pathways or firestop collars perform very well and can accommodate a large range of movement. This is to be expected since these types of products do not involve a curing process with an adhesive bond formed to the penetrant. It stands to reason that firestop systems that utilize a sealant will eventually suffer damage during movement since the bond between the firestop and penetrant will be compromised at a critical displacement value. However, this is not to say that these types of systems are inherently inferior to firestop devices. 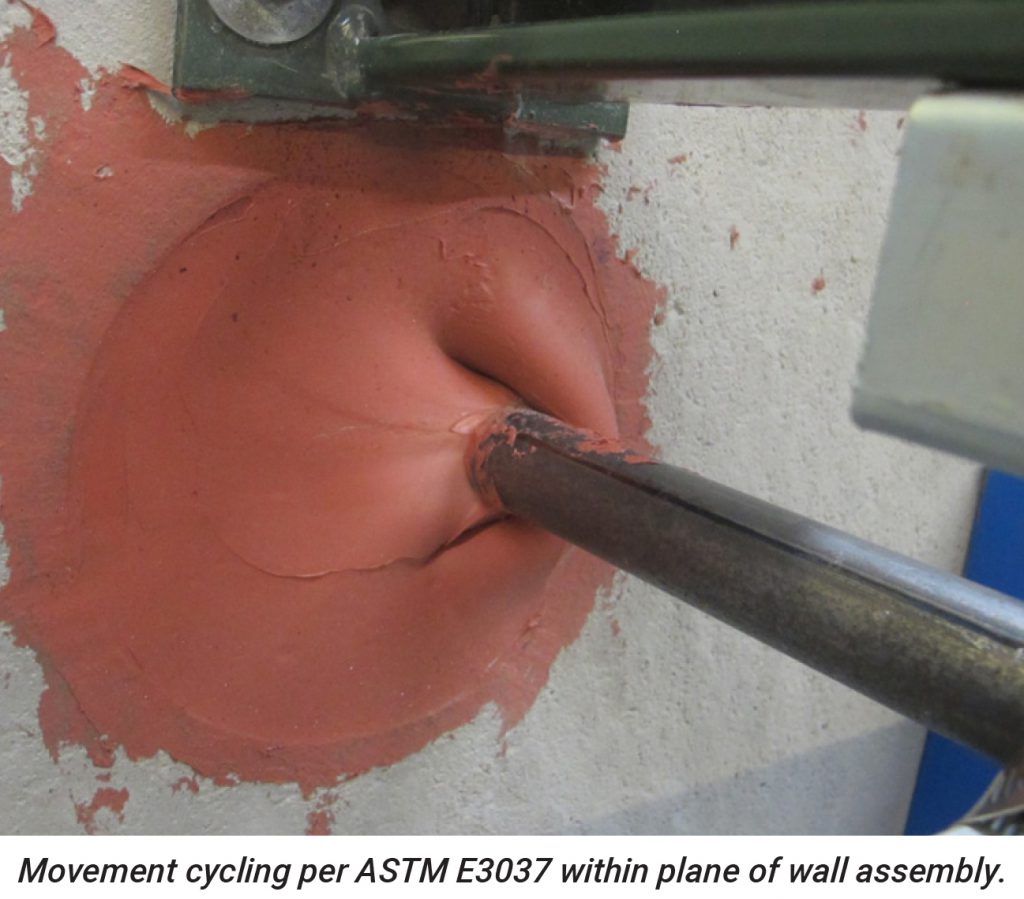 STI and other firestop manufacturers can point to decades of successful installations that feature firestop sealants without any indication of damage in the face of normal movement cycling. Collectively these installs have been subjected to water hammer, thermal expansion/contraction, vibrations and deflection due to building loading just to name a few potential causes of movement. Failure in a sealant based firestop system due to penetrant movement is an outlier and can likely be traced back to an extreme operating environment or a potentially compromised installation process. Firestop sealants are specifically formulated to perform in real world conditions and have continually demonstrated their ability to accommodate typical building movement through the years. ASTM E3037 testing will soon give interested parties additional information when selecting a firestop system. As an industry we have to be careful we are using this data as a meaningful screening tool, and we must not fall into the trap of simply selecting a firestop that accommodates the greatest degree of movement. There are many other important factors to consider when arriving at the best system for a given application.