Contractors performing above ceiling projects did a great job with the plumbing and/or electrical work,

but they weren’t always firestopping when the jobs were completed. Baptist Health established an Above Ceiling Access and Barrier Management Policy and Procedure that standardized firestopping requirements – a no-nonsense program designed to ensure compliance and occupant safety.

Individual departments had been hiring contractors to do above ceiling work at 11 different BH facilities, but firestopping wasn’t being done as part of the work – nor was a formal inspection process in place to check the work.

Baptist Health is a statewide health system with many facilities and contractors. Changing the old way of doing things to a step-by-step program of “doing it right or not getting paid” ruffled some feathers at first – but once established, it created an atmosphere of trust, safety, and limited liability for both BH and its contractors. 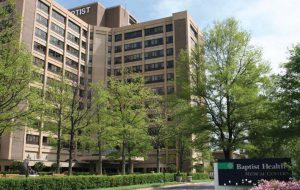 Baptist Health is the largest health system in the state of Arkansas, with 11 community hospitals and 3,000 beds, as well as clinics and multiple ancillary facilities at campuses throughout the state. Baptist Health recognized the need to establish a program to improve its life safety systems in hiring engineer Joshua Brackett, PE, SASHE, CHFM, as Special Projects Manager in 2017. “Our goal was to establish procedures and permit process not only to ensure compliance, but occupant safety – we have to protect patients,” Brackett said. “We needed to create an above the ceiling permit program that had some teeth in it for all of our primary facilities.”

A rigid Above Ceiling Access and Barrier Management Policy and Procedure was established that changed the way contractors performed services at specified BH facilities. The program starts with certification and formalizes protocols that provide specifics such as parking, material collection, and required permit display. It formalizes how work is expected to be performed. It also includes annual training and re-certification, and standardizes on STI Firestop EZ-Path and SpecSeal SSS Intumescent Firestop Sealant.

Through this program, work performance determines financial compensation. It also carries a clear “three strikes and you’re out” policy. A contractor’s first violation against the policy carries a warning, the second, a three day suspension from campus, and the third violation prohibits the contractor from working again at a BH facility.

“Before we sign off at the end of any project, we inspect the work and hold contractors responsible. It is their job to identify unsealed issues before they start, and we expect them to perform all firestopping work when they’re finished,” Brackett said. “It can be a cable contractor who has done a great job of running cable, but if they haven’t fixed the firestopping to UL standards, they don’t get paid.” Internal departments that have hired contractors on their own over the years have also bought into the program, understanding the need for safety across the board. “If a department within a facility hires a contractor to run wiring, they understand – it’s not THEIR building,” Brackett said. “We have come to work together on this; there are no hard feelings. It’s in everyone’s best interest – including the contractors. Bottom line is, we’re all legally liable for patients’ lives.” 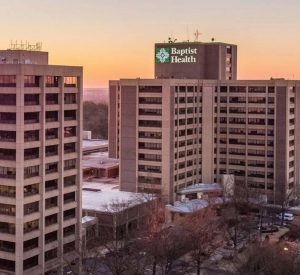 “I worked with EZ-Path as a specifying engineer and loved the application,” Brackett said. “When I came to Baptist Health, they used EZ-Path, but it wasn’t 100 percent exclusive – every so often, we would see other products through the bid process. To simplify training and expectations for our internal team and partners, we decided to make it a standard; we appreciate its easy installation and maintenance-free feature. We also standardized on the SSS Sealant – it expands to provide protection at two stages when exposed to high temperatures.”

The fact that STI Firestop provides training was another critical function in our decision. Most of the certified contractors, staff leaders, and supervisors have been trained in STI’s FIT (Firestop Instructional Training) Basic Training and/or Installer Training, Level 1 programs. “Even if people have gone online to take these courses, we want them to do it in person to earn their actual CEUs,” said Brackett. “This is when we can talk about things face-to-face, along with STI Firestop folks. We try to offer training at least twice a year. It’s important that everybody understands firestopping and the criticality associated with passive fire protection, especially in defend in place occupancies.”

The BH Above Ceiling Access and Barrier Management Policy and Procedure program accomplished the unthinkable: changing the “we’ve always done it that way” mentality. In fact, one contractor did “strike out,“ but the company was given another turn at bat. “I had to tell someone – a longtime contractor – that he wasn’t welcome back on the campus,” Brackett said. “He said ‘you can’t do that.’ ” “I said: ‘I just did.’

“We met again later, he understood what we’re trying to accomplish. He took a class; he’s respectful; and he got another chance,” Brackett said. “I’ve since seen him personally teach about firestopping on the job.

“There’s a reason we do this – it’s because of smoke and fire,” Brackett said. “It’s on all of us to protect patients.”