As a firestop manufacturer, we are frequently asked to provide firestop design recommendations for various applications. Many of these questions deal with firestopping nonmetallic pipes. With over 45 UL tested and classified designs for firestopping virtually all types of plastic pipes through all common constructions, STI is a recognized leader in the industry. 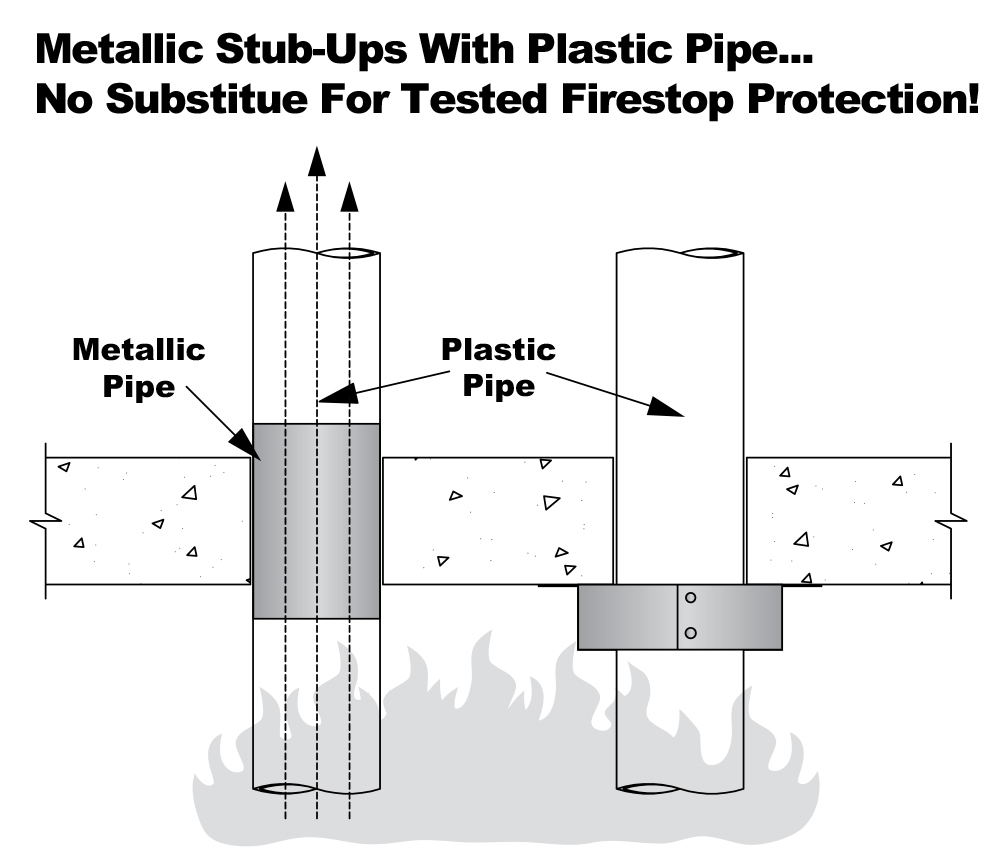 An alarming trend that we are seeing is the use of short lengths of metallic pipe being used to replace the plastic pipe where it penetrates a fire-rated floor. I’m sure this idea has been conceived with the best of intentions as an inexpensive method of fire-protecting nonmetallic pipe penetrations. These efforts are misguided in that metallic stub-ups in many applications may be extremely dangerous and actually complicate the fire protection of plastic pipes.

Underwriters Laboratories tests plastic pipes by extending the pipe 1’ into the assembly and 3’ above it. The end of the pipe extending into the furnace is capped using a material similar to that used in the pipe. In tests of vented systems for DWV applications, the end of the pipe extending out of the furnace is left uncapped. Thus when the furnace is lit, the fire burns the cap off and positive furnace pressure projects the fire into and up the pipe. Depending on the size of the pipe and the method of protection used, the fire may project up and out of the pipe, very quickly igniting the plastic on the unexposed side of the assembly. On pipes open to the fire, flames have been observed projecting out of these pipes to a height of 6’ or more above the floor surface!

Stub-Ups are not the answer! Experience demonstrates that replacing the plastic pipes at the floor with a short length of metallic pipe is not the answer. The fire will simply be blown past the metallic pipe into and up the pipe, spreading the fire with alarming speed. Combustible construction and stub-ups represent an even more dangerous combination. Wood construction members in close proximity to the pipes can ignite literally in seconds! The fact is… Combustible pipes are very frequently used in combustible construction. Thus where it may be the most critical, dangerous systems offering little or no protection are being used. Considering Sanitary Tees and branch connections that occur within the floor membranes themselves, there is no logical method for replacement of plastic pipes that offers any assurance of safety without specific testing. 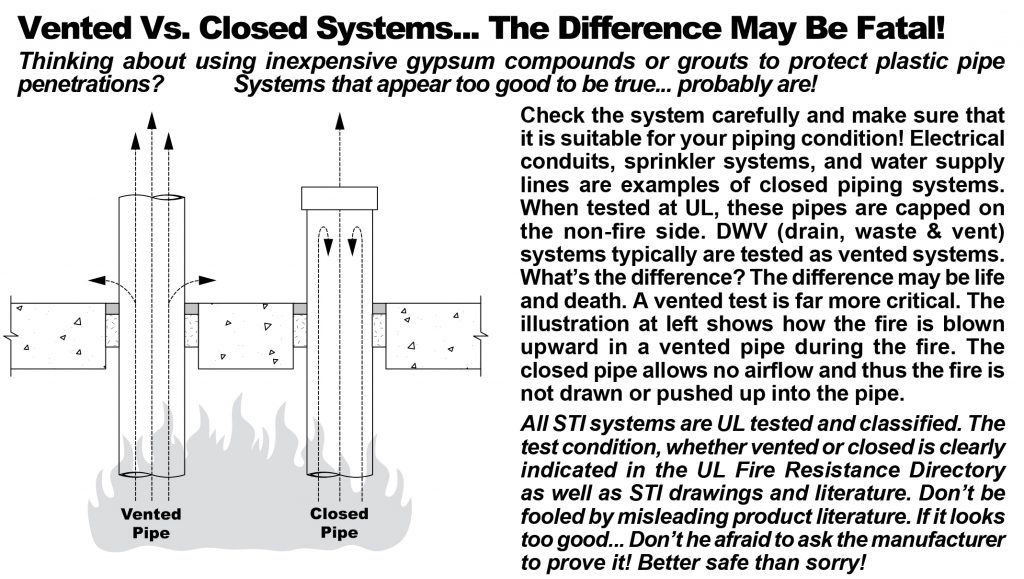 The proper way to protect plastic pipes during a fire is to close them down and block the path of fire, hot gasses and smoke. The best place to do this is within or below the plane of the floor. Tested firestop products and devices represent the best and safest approach to the protection of plastic pipe penetrations. In some systems, intumescent materials and devices are used to squeeze the pipe shut, cutting off the path of the fire and the flow of hot gasses. In others, portions of the plastic pipe system are replaced with metallic elements. In all cases, the safest bet is a tested and approved design. Putting the squeeze on metallic pipes does no good! The fact is that once stub-ups have been installed, there simply is no practical way of firestopping them. The strongest of intumescent materials can’t close off a metallic pipe. Tested devices utilizing a partial replacement of metallic
pipes, often use internal mechanical devices to block off the interior of the pipe in the event of a fire. The most cost effective way to do the job is also the safest!

If you consider the cost and complexity of intermixing elements of metallic systems with plastic piping, it’s far easier and more cost effective to stay with plastic throughout. Tested systems now provide cost effective firestopping systems for virtually all types of construction. With tested, cost effective solutions in hand, there’s no logical reason to do it any other way!