We celebrate 20 years of innovation in fire-rated cable pathways with our EZ Path® Fire-Rated Pathway. When we speak of “fire-rated pathways,” it is a term we coined.

As telecommunications professionals will tell you, the pathway is defined as the system that carries the cabling from the telecommunications rooms (TRs) throughout the building. We envisioned using purpose-made devices to maintain the pathway’s continuity through fire-rated floors and walls.

We conceptualized the EZ Path system from the beginning to get the maximum amount of cable through the smallest footprint possible. No greater example of maximizing cable density through a smaller footprint exists than our EZ Path Modular Grid System. It has become the standard for running cabling vertically within high-rise buildings. This is the story of how this system came to be.

In 2007, a major bank built a new 50+ story tower in New York City. The project team engaged one of the preeminent design firms for low voltage cabling to engineer the IT infrastructure. The design team was presented with a challenge; the owner wanted more usable floor space, which meant spaces such as the TRs needed to shrink. The tremendous volume of cable required dictated the size of these spaces and now they had an engineering challenge to get the same cable volume through a smaller space.

The design team looked at traditional steel sleeve systems cast into the floor. They initially asked us to help determine the minimum space required between the sleeves. We pointed out that accessibility would become an issue as the cable began to fill the sleeves. Additionally, they understood that they needed the ability to expand in the future as the client’s technological needs necessitated running additional cables.

Our thoughts immediately gravitated towards the EZ Path System. The square shape of the device lent itself to nesting tightly, and the self-sealing function would allow for future cabling moves, additions, and changes, but we did not have a floor system for multiple devices. We quickly sketched our idea on graph paper. We would devise a frame system that would support the banks of EZ Path devices. The devices would attach using the integral hook and eye feature for connecting devices. The lead designer liked the idea but was concerned about the initial installed cost if they were to populate the frames fully. Our engineers took note of the concern and continued ruminating on the idea. 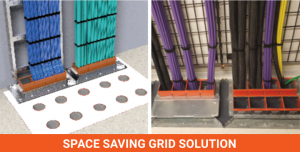 That afternoon, the STI engineering team held an all-hands meeting. The group considered the merits of a modular system and sketched it on a conference room whiteboard. The idea for the frame system quickly took shape. As our engineers used their problem-solving skills, they happened upon the idea of incorporating our lightweight firestop composite sheet panels as cover plates. The panels or cover plates could be installed and quickly removed to add more EZ Path devices to accommodate future cabling needs.

The EZ Path Modular Grid System hit the market six months later to much fanfare. UL System No. F-A-3037 was published, initially allowing for 4, 8, or 16-ganged device configurations with the option for quick and easy future expansion. Today, it remains the most flexible system for vertical riser conditions, and we owe it all to a customer visit and troubleshooting a problem.

We hope you enjoyed this story of the origin of the EZ Path Modular Grid System. STI engineers welcome the opportunity to help you solve the most demanding firestop applications. At our core, we desire to be problem solvers first and foremost.

We look forward to solving the next one, so give us a call if we can help.

This article originally appeared in The Burn – Summer 2022 Wrap up.