Wood frame construction and fire are a deadly combination! It’s easy to understand the concern people have about fire when it comes to wood frame structures. Everyone knows full well that wood is easily ignited and burns rapidly. More deaths occur in wood frame buildings each year than in any other type of structure. Over the years, designs and construction practices have evolved to provide added safety. My father-in-law was a union carpenter by trade. When I was designing and building an addition on our first home, he presented me with a turn-of-the century carpenter’s handbook. It had a whole section detailing construction practices that addressed limiting or slowing the spread of fire. 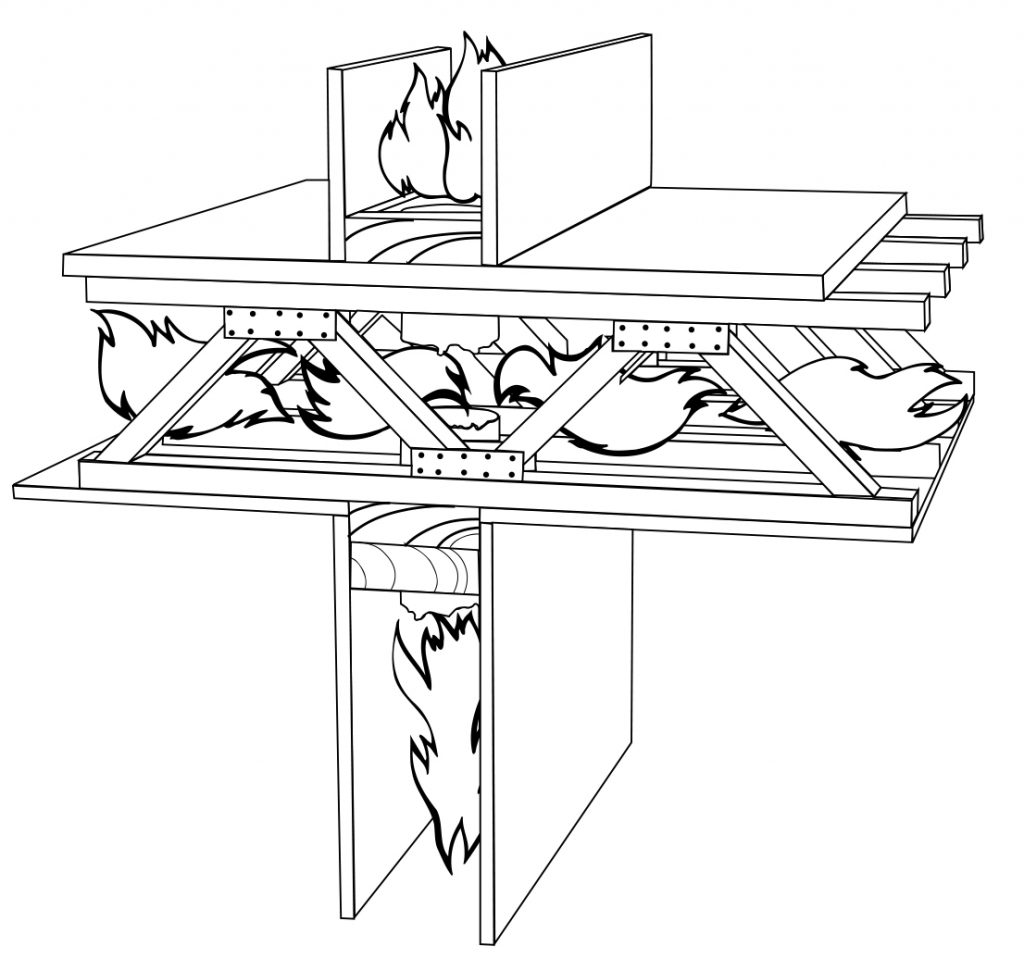 The problems and solutions aren’t new… This book demonstrated that designers understood the problems related to wood frame construction over 100 years ago. While the techniques put in place in those days are still in use today, the changes necessary to adapt them to modern conditions haven’t always occurred. Despite the availability of better materials and products, fire remains a deadly hazard. Simple changes in construction practices can greatly reduce the dangers of fire. These life and property saving practices will be the subject of our discussion today.

The hazards of “balloon construction” were described in great detail in this tattered apprentice’s handbook. In simple terms, balloon construction was described as a wall that ran continuously through the floor above, rather than having the floor assembly resting atop the wall on each floor. It described this type of wall as being particularly hazardous because a fire starting on one floor could travel up the wall cavity hidden and unimpeded to readily spread the fire to the floors above.

This book didn’t address electrical cables nor plastic pipes or conduits… Not too many areas actually had electricity and plastic hadn’t been invented yet. It also didn’t consider that fires might actually start within a wall cavity although it certainly recognized the problems that could result if a fire managed to get into it. Shortly after America began to wire its buildings, electricity and fires within wall cavities became and continue to be, a major problem in this type of construction. It also didn’t address the use and limitations of gypsum wallboard. Most buildings used plaster over lath construction.

Hidden combustible penetrants make firestopping more critical. Today’s wood frame structures contain ever-increasing amounts of electrical wiring supplying the needs of an ever-expanding and power hungry array of appliances and devices. In the wintertime, stories in newspapers about deadly fires started by space heaters or overloaded outlets are now common place. Fires starting in receptacle or switch boxes, or penetrating into the wall cavity pose a distinct danger to the floors above. Good firestopping practices are necessary to provide the time needed for residents to safely escape a fire as well as providing the critical minutes required for the fire department to respond.

The UL Fire Resistance Directories provide details on wall and floor construction as well as hundreds of designs for the protection of through-penetrations. That term “through-penetrations” is the basis for a debate concerning test methods used to evaluate firestop systems for use within what the industry refers to as “chase wall penetrations”. The firestopping issue relates to the fact that for many years, fire testing of “walls and floors” have really been a case of “walls or floors”. Testing, for the most part has been conducted on floors and on walls but not on both as a unit. Thus construction details are practically nonexistent for the areas where the two intersect. The only area of the UL Directory that provides some details relating to the point of intersection is the firestop section itself.

Simulated testing… A test first used by UL back about ten years ago utilized a construction thought to simulate the condition. A small scale floor assembly was constructed utilizing a small wall section attached to the underside (see Fig. 1 above). It was thought that this test would be more severe than actual field conditions in that the fire would impinge on both sides of the wall at the same time.

This sounded good in theory, but the one foot wall stub may not be a true indication of how larger sections of wallboard typically used with 8 or 9 foot ceilings are known to behave during a fire. These small pieces of wallboard have a higher ratio of fasteners per square foot of area along with far less hanging weight and are thus less likely to collapse as the fire dehydrates them. Experienced designers of firestop test assemblies quickly realized that the test may not be critical enough and did not provide any indication of performance in situations where the fire starts within the wall cavity or manages to enter it in some fashion. This issue is most critical in terms of evaluating firestop systems for nonmetallic (plastic) drain, waste, and vent (DWV) piping systems. An improperly designed firestop system represents the same potential hazard posed by balloon construction.

Firestop systems suitable for nonmetallic DWV applications in wood floor construction are categorized under the UL alpha numeric system as FC2000 series systems and may be found in Volume II of the UL Fire Resistance Directory. A review of these systems will show that designs seem to fall into two broad categories; systems tested as exposed through-penetrations where the pipe penetrates a floor outside of the wall and the chase wall systems we have already described.

Through-penetrations obviously represent the severest form of exposure. The penetration is immediately exposed to fire and remains so throughout the test. In these tests, intumescent materials (which expand when heated) or specifically designed mechanical devices are generally required to constrict and close off the burning pipes. Since it is the most severe exposure, UL permits systems tested this way to be published as being suitable for both conditions. Systems tested as chase wall assemblies only are not approved
as exposed through-penetrations due to the less severe nature of the test exposure.

Chase wall systems published as extensions of through-penetration systems may at first appear to be over-built. In fact some less experienced people have not only attacked these systems as being over-built but have decried the use of intumescent materials as being “unnecessary”. They refer to what are known as “caulk-only” systems as an example of less expensive systems published in the UL Fire Resistance Directory.

While these systems pass the test, they are for the most part, incapable of sealing off a vented plastic pipe in the event that fire either starts within or enters the stud cavity. Thus these systems are in reality, little more than a smoke seal.

UL is considering changes to test requirements in response to this issue. I would also encourage code officials and inspectors to educate themselves on the unique fire protection requirements of wood frame construction. Don’t be afraid to ask a manufacturer how his product and system works. Ask the manufacturer if his firestop design is capable of shutting down vented, nonmetallic pipes in the event that the fire starts or penetrates into the stud cavity. If in doubt, require supporting documentation. As a manufacturer, I can’t dictate test methods nor code requirements. I am subject to the set procedures that they dictate. I can however, share the benefit of 25 years of experience and hundreds of tests.

I would encourage everyone to consider these issues carefully. For over 100 years, this problem and its relatively simple solutions have been part of every carpenter’s apprenticeship training. Blocking the path of fire is a fundamental concept. Adapting this concept to the service needs of a 21st century structure should be relatively easy given the available body of knowledge and the advances in material sciences that have provided proven solutions.

If the author of my father-in-law’s handbook were to travel to our present day, his book probably wouldn’t be all that different. I’m sure
his logic would remain the same. Which type of firestop system would he recommend? I think the answer is obvious.