2.5 Minutes To Stop A Fire – How SpecSeal® Patented Two-Stage Technology Expands The Margin Of Safety For Protecting Plastic Pipes 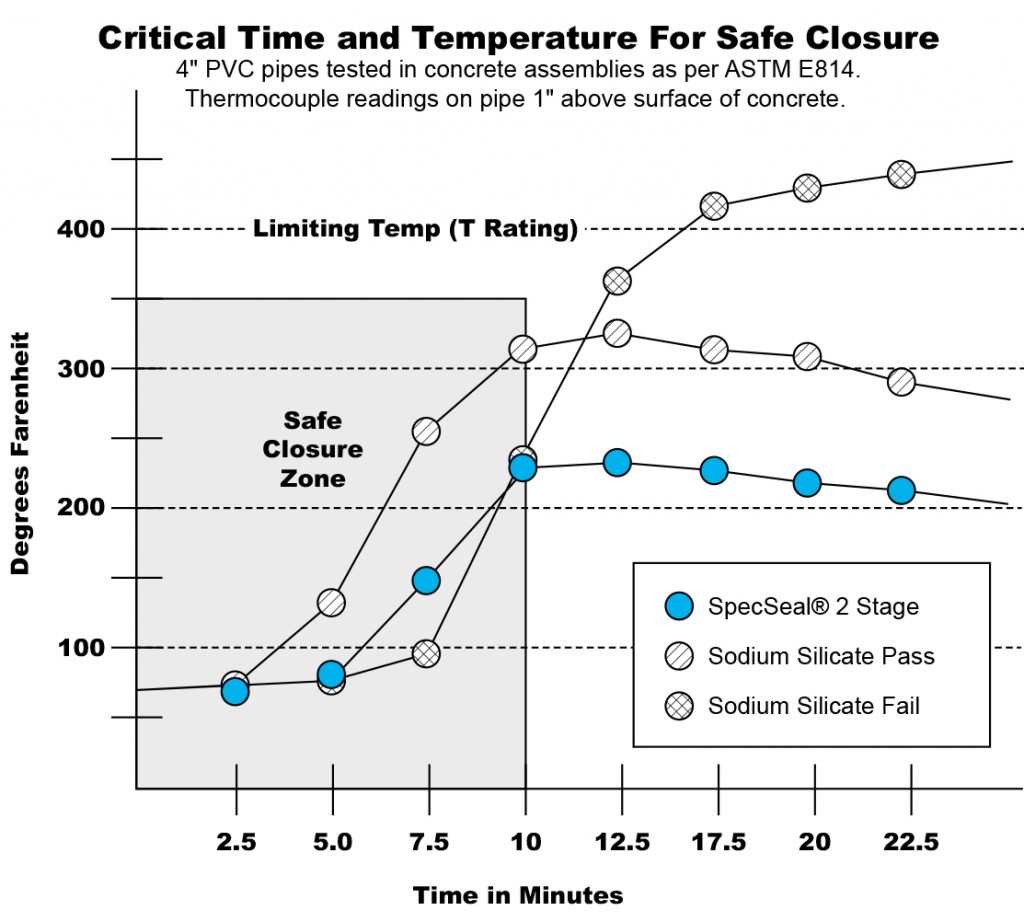 Two and a half minutes is often the difference between passing a fire test and failing one. In these situations money and time is at risk but not life and limb. In the last two years we’ve learned a great deal about plastic pipes. We’ve also learned a great deal about our own two-stage technology. SpecSeal® Collars and Wrap Strips have been tested in 25 separate installations. We’ve qualified the products for use with PVC, CPVC, ABS, ABS Foam Core, and FRPP (Fire-Retardant Polypropylene).

The most difficult installations involve vented pipes. In these installations a cap is placed over the end of the pipe that extends into the furnace to simulate the fire burning into the pipe. The end of the pipe sticking out of the furnace is left uncapped to allow the fire to be drawn up the pipe (the chimney effect). Once the cap burns off and the fire invades the pipe, it becomes a race to shut down the pipe before the fire burns out the pipe on the outside of the furnace. Our experience indicates that two and a half minutes is the approximate time limit for affecting this closure.

In comparative tests conducted with sodium silicate products, we have found that the fire actually blows out the top of the pipe for a brief period. In some cases, the firestop collar shut down quickly enough to prevent burn through. In others it did not. In these tests, we studied the results to attempt to determine the cause of the failures. We very quickly learned that the safe window was indeed very small. SpecSeal® Collars and Wrap Strips have successfully protected nonmetallic pipes in all 25 of those tests. These products have never failed a burn test. After each one of these tests, we studied the results to attempt to determine why we succeeded so well. We think we have finally accumulated enough data to point to an answer.

We frequently demo the rapid expansion of our products using a heat gun to expand a wedge that has been cut out of our dried sealant. The comparative test is quite dramatic and demonstrates a clear advantage over the competition. But how does this translate into actual performance in a fire? The first and most obvious difference is that fire never makes it up the pipe with SpecSeal® products. In all 25 tests, no flaming has been observed!

The second advantage is in the T Rating. Thermocouples placed on the pipe 1″ above the top surface of the test floor monitor the temperature rise of the pipe. Our tests indicate that for PVC temperatures of 400°F will not only constitute the end point for the T rating but will also damage the pipe so extensively that it will also fail the test due to a burn through at some point late in the test. Our testing indicated that in successful tests utilizing sodium silicate products, the temperature on the pipe reached 330°F on average. Unsuccessful tests very quickly exceeded the 400°F mark. 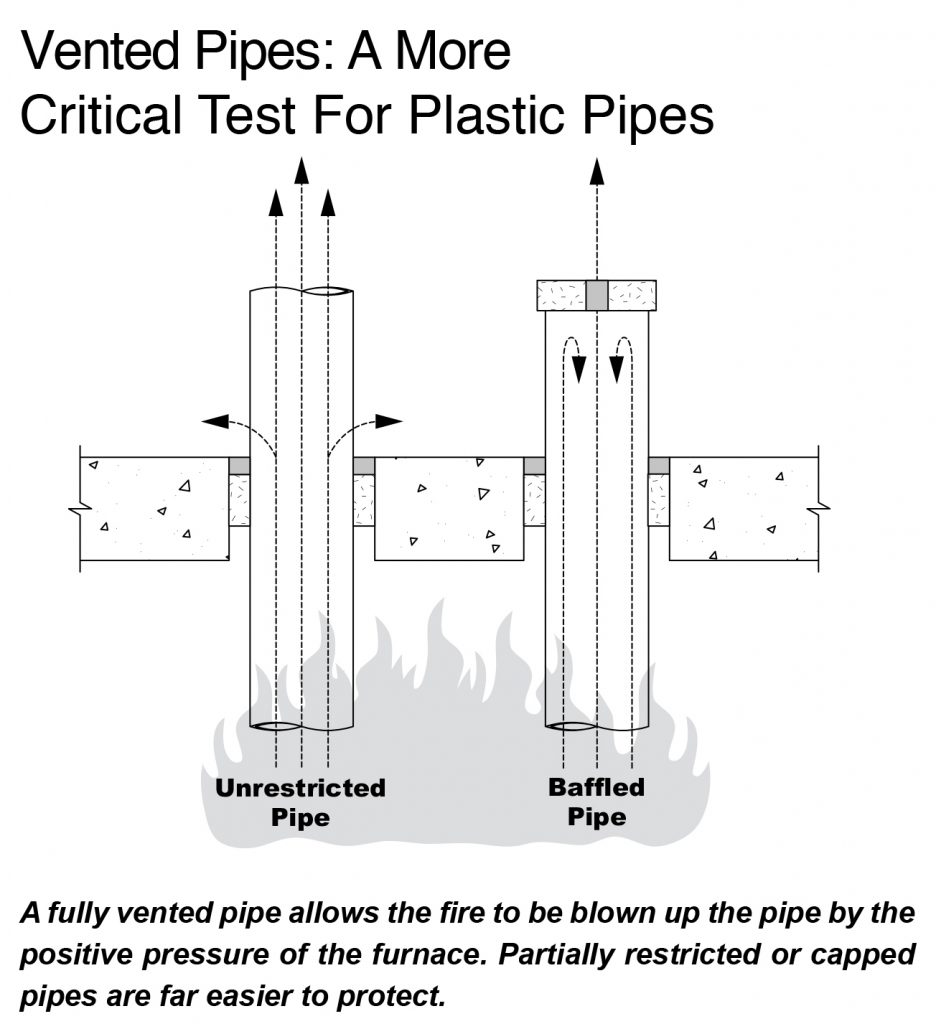 The two and one half minute window is very small for sodium silicate products. In actuality, we are not sure exactly what the actual window might be for SpecSeal® products. The important factor in addition to time is temperature. We know that for products that might allow a potential 400°F temperature, two and a half minutes is all the time there is! In that same two and a half minutes, SpecSeal® products get the job done quickly with time and temperature to spare.

Beyond a quick and effective closure needed at the beginning of a test is the staying power needed to go the distance. SpecSeal® products may start the race like a champion 100 meter sprinter but they finish the race with the stamina of world class distance runner. Sodium silicate expands when heated but will melt and shrink as the temperature increases. In many designs, this shrinkage is compensated for using putty or sealant strategically placed around the perimeter of the collar where it attaches to the wall or floor surface. Our tests indicated that shrinkage in some cases was significant and led to a substantial temperature rise during the late stages of the test.

SpecSeal® Collars and Wrap strips will not shrink as the temperature increases and in fire exposures as long as 3 hours, maintained a full and densely packed char. Sealant is recommended as a smoke seal in all applications (even though some tests have been conducted using no sealant or putty what-so-ever). It is our determination that seals installed on the fire side will be largely ineffective in blocking smoke. The high performance properties of SpecSeal® Two-Stage Technology allow us to tackle even tougher applications. The installation methods generated for use with ABS Foam Core and Polypropylene pipes are identical to those for PVC (even though these materials are significantly more difficult to protect). Systems presently in use for sodium silicate products frequently require the pipe to be insulated in order to buy additional time for closure of the pipe.

So just how long is 2.5 minutes? In about the same time it took to read this page, a firestop collar would have had to expand and close in order to stop a fire. If you are using SpecSeal® Collars or Wrap Strips… relax! The job has already been accomplished with time and temperature to spare.

Fully Vented Pipes… A Challenging Test! Restricting the airflow though a pipe reduces the potential for fire to blow through the pipe. To make sure SpecSeal® Collars and Wrap Strips are up to the challenge of protecting plastic pipes, we have insisted upon fully vented testing. You can be sure that products and systems represented as suitable for DWV (drain, waste, vent) have been properly tested and evaluated.